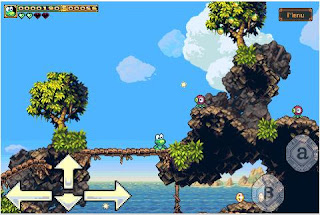 There are many platformers on the app store, but most of them are not presented in the pixel by pixel detail that Frogatto is rendered with. With wonderful pixel-styled levels, the game is sure to have you occupied until the end! Even better, it's developed by the brilliant guys behind Battle for Wesnoth!

In Frogatto, you assume the position of a frog as you fight the wrath of evil that roams the land. With old school elements, the game has you jumping, fighting, and collecting coins through different levels.

Like many of the platform games on the app store at the moment, you control the main character using various on-screen buttons. In Frogatto, there is an up arrow that controls his jumping, a down arrow which makes him duck and activates other things, and then left and right arrows for moving in those two directions. On the right side of the screen there are two letter buttons: A and B. "A" activates the attack which resembles the kind of thing Yoshi would do with his tongue out, and "B" controls jumping.

These controls work once you've grown accustom to them, but they're bit bulky, and are located in a bad place. It's difficult to press the buttons that you want as they're all squeezed on the bottom of the screen.

The game has an amazing style of art that brings back memories from the old days. Everything is made in the pixel-style and rendered to perfection. It looks great on my iPod Touch 2nd Generation, so it must look amazing on an iPhone 4 (if it has Retina display support).

The creators of Frogatto didn't fail to create an enticing game with many levels and tons of replay value. The game has already earned a spot in my "Favorite Games" folder, and I see it staying there for a long, long time!

I bet you that for years there won't be another platformer on the iPhone and iPod Touch industry that will earn a name better than Frogatto. The game has a phenomenal plot, cute character, great storyline, and most of all stunning artwork. It is without doubt one of the best platformers on the app store.

Even with the high-ish price tag, I highly recommend it!